The definition of iterate is to 'perform repeatedly' and this looping node repeatedly performs a data read of either a file or data variable. The loop continues until it reaches the end of the file or the end of the data. You can set a maximum read iteration value. 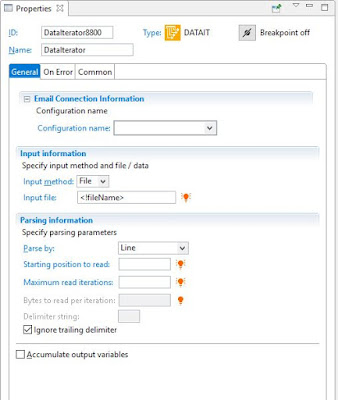 You can Parse by Line, Delimiter String, or Length.

Parsing by line will load the entire line of data during each iterative loop. You need to do something with that data so an Assign is usually used within the loop. If your line of data requires additional parsing (perhaps by comma separated fields), you can nest another Data Iterator within the first to parse the fields within your line.

Parsing by delimiter string (you have to specify the delimiter value), like a comma or pipe, will load each data value within the delimiter during each iterative loop. This means that if I have 20 comma separated fields, each field is processed individually. This is not a fast process.

Parsing by length will load set bytes of data during each iterative loop. I have never used this method.

The Ignore trailing delimiter checkbox is useful if your delimited data has a null value after the last delimiter value. For example if my data looks like David,Williams,Consultant, and there isn't any data after the last comma, the Data Iterator won't try to process that null value. 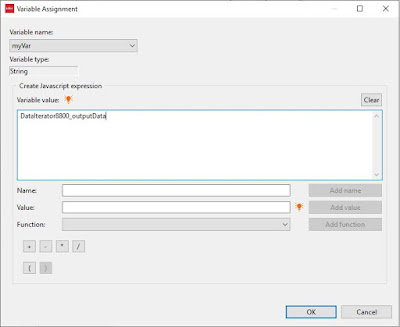 Regardless of the parsing method, the data within each loop will be referenced the same way - DataIterator8800_outputData

My recommendation is to load your file into memory using a File Access and then to set your Data Iterator to parse the Data.