Different ways to use a Boolean Derived Field 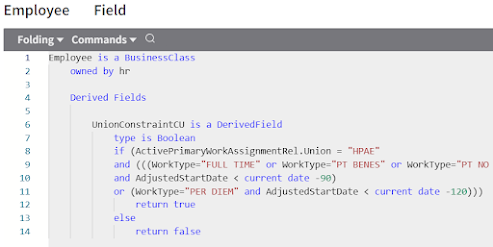 You can also use the criteria to add a field constraint -

You can apply a constraint to a field's dropdown so a specific value is hidden on a form.

This type of constraint doesn't include the text you normally apply to an Action or Form constraint.

Form Configurations
Layout
single column - fields are presented in a single column
two column - two fields are presented side by side
two column distributed - two fields are presented spaced apart depending upon the width of the fields and form
Add a custom label to a field
single column
field name
label is untranslatable:"Enter_the_label_value"
You can also use 'camel case' so each word is presented in uppercase "EnterTheLabelValue" and the system will automatically add spaces so the display would be Enter The Label Value
Present a field as display only without a label
field name
display as text
no label
Present a field's label in a color or in bold text
field name
color is red
bold
Make a field required
field name
required
Add a Header to the various sections of the form
header3 of "ConfidentialityAgreement"
single column
field name
field name
header3 of "User_Fields_are_Required"
three column
user field name
required
user field name
required
user field name
required
label is untranslatable:"DateOfPurchase"
Add Text to the form
text of "The_following_information_is_helpful"
Add a Blank Line
blank line
or
text of "_"
Do something after a field has been updated
two column
StartDate
when value changed
EndDate = StartDate + 1 year
EndDate
Make a field visible when another field has value
single column
StartDate
visible when (StartDate entered)
EndDate
The 'visible when' control is based upon a 'state' of a system value, a field state or a boolean value (which can be defined is a User Derived Field) and can apply to sections of a form or to individual fields
Make a form section visible when a system value exists
visible when (BenefitEligible.No)
single column
text of "OR"
Posted by Consult David W LLC

I have two difference clients using ICIMS for recruiting and integrating with GHR for onboarding new hires, processing rehires and performing transfers and promotions.

One client is processing a nightly pipe delimited file and the other is using API calls and checking hourly for new transaction data. I'm using IPA to process both integrations.

The client using the file integration is running the transactions through a data warehouse first and performing some edit checks and translations there before sending it to GHR.

The client using API calls is also sending Job Requisitions to ICIMS from GHR, once they're approved, and providing other feedback to ICIMS after the new hire is processed (GHR employee number), using API calls.

For this client, we are also retrieving the PDF documents from the candidates in ICIMS (Education, Certifications & Licenses) and attaching them to the Hire a Resource form. These binary data files are processed via API calls and saved first to the PfiFileStorage before being attached to the hire transactions.

Two clients with different approaches, but both successfully integrating ICIMS and Infor GHR.

Where is the problem? Is it a bug?


I've been involved with a lot of implementations and upgrades over the years and I'm certain that every one of them had hit a snag at one point or another. Whether miscommunication, improper training, or technical issues, all of these needed one step to get to the solution - an evaluation of where the problem lived.

Not just what issue are we dealing with, but where is the actual problem?

One project I was involved with had major allocation issues in the storeroom. Items were being allocated to orders before the item was even in stock. This appeared to be a major bug that would require escalation to the vendor before the client could go live, and that was the path the project manager was taking to get to a resolution.

I was one of several supply chain consultants, primarily brought in to help with pre-go live training and go live support. In other words, I was just there to help the team cross the finish line.

I don't recall if I was asked or if I just overheard about 'the bug' that was causing frustration, but I decided to look at the system settings.

The flag that allowed allocation on open PO's was set to 'No' correctly, yet the system was allowing it. That made no sense, so I kept digging and eventually found another setting that seemed to be contrary to the no allocation setting.

I don't remember the actual setting now, but I do remember that it seemed to allow for allocations when an item was on order (not yet received) and so I brought my discovery to the project leaders.

Expecting a high five for my doggedness, I was surprised when I was told that my discovery could not be the cause of the issue since the other allocation flag was set to no.

To their credit, however, they did allow me to run through some system tests and I found that this one setting, against all logic, was in fact where the problem lived.

Issue solved, go live saved, bonus awarded (not really). By this point everyone was just ready to get the issue behind them and focus on the important go live.