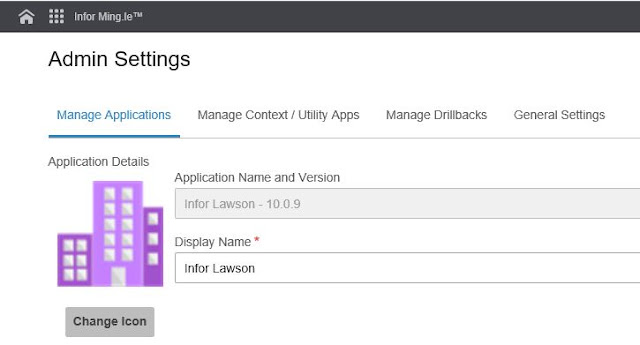 Within the Admin Settings menu, select the application to view and look for the Logical ID tied to that system.

Infor Federation Services - Are you a User?

We previously discussed Role Management but this time we're interested in User Management. Users are updated in the system(s) by the Security User Master (SUM) BOD but where do you maintain those users and their roles?

Within Ming.le you would access the User Management menu (click the Person icon in the upper right of your screen for the available menus).

Within the User, you can assign the Roles you want this user to have for the various Infor systems. 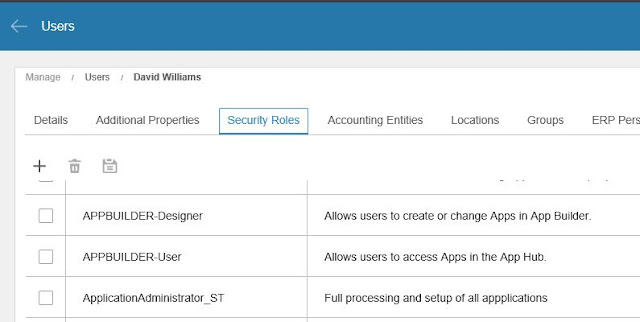 The Logical ID identifies what system(s) are associated to each Role. In an ideal world, each role would be linked to one Logical ID, but you can tie more than one role to a system (see Role Management).

Check the box for the Role(s) you wish to add and click Add & Close (or Add if you need to add more roles on a different page). Once you've saved the User updates the SUM BOD will be triggered. This BOD will update the User's Roles in each system required. 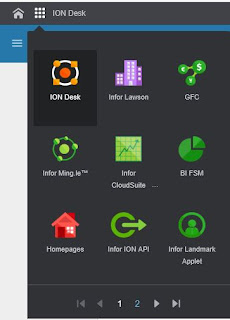 Once the User receives access to a system, that system's icon will be available to them in the App Switcher menu.

Infor Federation Services - What Role will you play?


While security roles are stored in IFS, they are actually 'owned' by the systems they sync from.

Whether Landmark multi-tenant (MT), Landmark single tenant (ST), Lawson, EAM, Mongoose, etc. these systems own the roles and they send a Sync.SecurityRoleMaster BOD to IFS to create them.

You can create these roles in IFS, but that only confuses things when you later want to manage the roles assigned to users.

Here's a for instance; you used to have to create the same security roles in both Lawson and Landmark and keep the users in sync via ISS - this isn't true once you move to IFS.

Under this process, if a user needs a Lawson role assigned to him or her that role first needs to be synced over to IFS (from Lawson) and then assigned to the user in IFS. IFS will then send a Sync.SecurityUserMaster (SUM) BOD over to Lawson with the roles attached to the user.

In fact, the SUM BOD contains all of the roles per user for every system you're syncing to via IFS (by Logical ID). Those roles are rebuilt (removing the old roles and adding the new ones) when the SUM BOD is processed.

You can, if you decide to, update the roles for a user in Lawson and it will in turn send a Process.SecurityUserMaster BOD request to IFS asking it to remove the role from the user. Once IFS consumes the Process BOD request, it will re-send the Sync SUM BOD back out to make the change 'official' (for lack of a better term).

In this case, the Sync SUM BOD will actually add the Role to back to the user in Lawson. IFS couldn't remove the role from the user because it was associated to two (or more) Logical IDs and so the security update back to Lawson will show that role as being valid to the user.

If you only setup the assignment of one Logical ID per Role (by letting the system which owns the role sync it to IFS),  you can perform the role updates in either that system or IFS.

Best practice, however, is to maintain which Roles are assigned to Users in IFS. 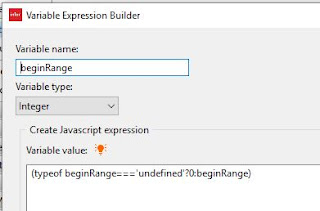 We had an interesting problem to solve which involved pulling data from the Lawson S3 GLTRANS table (based upon ObjID values). We wanted to pull 2000 records at a time and then trigger another instance of the flow to pull the next 2000, and so on, until all current records were captured.

We didn't want to work with two different versions of the flow, one with the beginning range value preset and one with it being passed from the Trigger. That meant we needed a variable assignment that would know when the variable existed and when it didn't.

So, on the Start node, when we defined the beginRange variable we used a particular function to create the variable when it didn't exist but to utilize it when it did.

In some programming languages, this is referred to as an 'immediate if' statement, meaning to validate it now. We couldn't simply tell IPA to set beginRange=beginRange because the system returned an error saying that beginRange is undefined (when it didn't already exist as a Trigger variable). 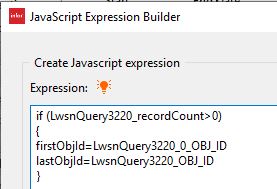 The next problem to solve was to capture the first and last Obj ID values from the query loop. Notice in the JavaScript expression above, we included the record number reference when we assigned the query's Obj ID value to the firstObjId variable.

The last returned value in the query (which was set to &MAX=2000) will always the value we're looking for so we didn't need to reference the record number. This also has the advantage of not having to account for when the query returned less than 2000 records.